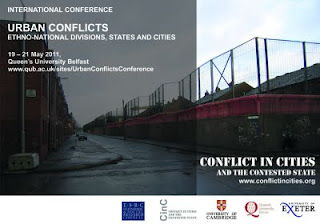 The Conference is to be held at Queen’s University Belfast on 19 – 21 May 2011. It is organised by the Conflict in Cities and the Contested State ESRC Research Project (2007 – 2012) and partly sponsored by the World Bank's World Development Report 2011 - Conflict, Security and Development.

This is a multi-disciplinary conference with a focus on the nature and dynamics of ethno-national conflicts as manifested in contested cities. Conversely, it questions how cities and everyday urban life are used - and abused - in the containment of these wider national conflicts, and it explores their potential for achieving the self-sustaining moderation, constructive channelling or resolution of conflict. It aims to enhance dialogue between academics and non-academic urban policy practitioners and community activists working in such contested cities.

The conference will include plenary and parallel sessions, round table discussions and a guided tour of Belfast’s ‘peacewalls’ and ‘shared spaces’. The opening keynote address will be given by Saskia Sassen.