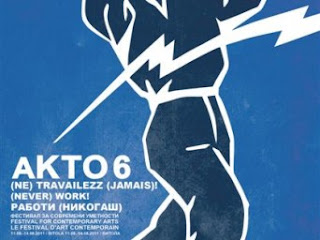 A performance in public space by artist Zoran Poposki in front of the Oficerski Dom in Bitola on 11 August 2011 at 8 PM will mark the start of the 6th International Festival of Contemporary Arts AKTO.

AKTO will be held until Sunday, under the motto "(Never) Work", inspired by a graffiti "Ne travaillez jamais" by the French philosopher Guy Debord in the 1950s. The festival, which this year places emphasis on the visual arts and music, announced 30 prominent participants from Macedonia, Italy, Croatia, Bulgaria, Mexico and Finland, and over twenty famous musicians from Macedonia, Serbia and Canada. 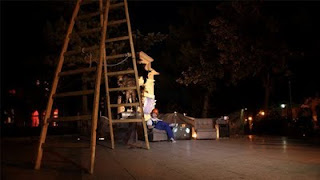 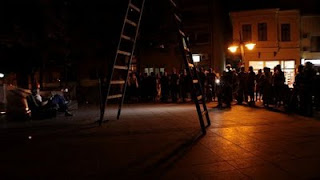 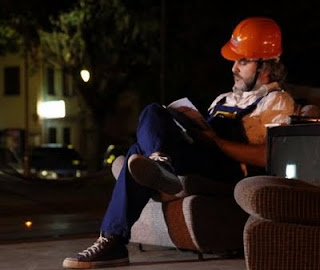 Arts, politics and economics have always existed in a dynamic interdependent relationship, which is, in part, stimulating, and, in part, produces contradictions or even oppositions: The arts are integrated into political and economic functional relationships, but they also appear as political protagonists, whose aesthetic strategies - whether explicit or implicit - reflect societal events or provide guidelines for successful coexistence in society. The spectrum of theoretical debate in the study of the arts ranges from questions concerning the position of the political in the aesthetic and aesthetic forms of expression of the political, to those who devote themselves to the political role of art or discuss the relationship of art and economics.

How does the political manifest itself in the arts against the background of its dissolution of boundaries and internationalisation?
To what institutional change are the arts subject in the light of (global) structural political and economic changes?
What role does the study of the arts play in this process?