International video exhibition
Video in Progress 3: Fields of the Performative

Koroska galerija likovnih umetnosti (Art Gallery Slovenj Gradec) hosts international video exhibition Video in Progress 3: Fields of the Performative. The third edition of the project, which in 2011 became a video festival organized by Kolektiva Institute and Photon Gallery, was first presented in 2009 at Kino Siska Centre for Urban Culture in Ljubljana (SI). Since then the project was presented in various forms in Gdansk (PL), Skopje (MK), Torino (IT), Rotterdam (NL) and Rijeka (HR).

The third edition of Video in Progress exhibition project is the result of international competition on the subject of performance for video. 46 selected videos featuring various formal and conceptual premises present heterogeneous interpretation of performance in relation to motion picture within the contemporary visual art.
Everything from regular performance in front of audience in a gallery to an exhibitionist and voyeuristic presentation of a body as an aesthetic object, absurd actions, exploration of identity, social and political roles, subjective views, narratives and the creation of film or documentary atmosphere. 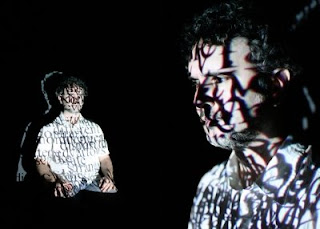 Three works directly address the topic of language and explore various methods of communication. In the performance Different, Zoran Poposki illustrates the influence of a society full of prejudices as to the image of an individual. The performer is, beyond recognition, covered with projections of words that express mainstream society’s view of those who live at its margins. The video Repeat After Me by Marianne Holm Hansen shows two persons in parallel who alternately repeat basic foreign language phrases lifted from a tourist guidebook and thus generate an impossible dialogue. In his video Quiet, Attila Urban uses two parallel pictures in a dialogue, which, with the help of universal gestures, form a peculiar narration.