Artist Zoran Poposki's work has been selected as a Juried winner in the NEW-MEDIA Category of the ArtSlant 9th 2016 ArtSlant Prize Showcase competition, by a jury of gallerists in Miami, New York, and San Juan.
The jury for the prize included: Chelsea Guerdat (Director of Operations, Apexart), Andrew Lee (Assistant Director, Sperone Westwater Gallery, New York), and Agustina Ferreyra (director and owner, Galeria Agustina Ferreyra, San Juan).
The artwork is a glitch gif based on Poposki's drawing from the Theoria series, based on a mural by Delacroix.

At the end of the 20th century, the conclusion of the Cold War led to a desired economic and political integration. Globally it was widely believed that nations had no choice but to adopt the new model of democratic capitalism, almost every government demonstrated optimism towards a new era of global convergence. In reality the world is far more connected than in the 21st century. Many Human Rights have gone from the unthinkable to realisation. Moments of triumph have led to a belief that democratic capitalism could create a more cultured and pro-liberal world, a new way of idealistic living for the future; a liberal utopia.
But now we ask: has liberal capitalist democracy triumphed? Has the economic and ideological determinism of the post-Cold War time guaranteed democracy? As global nations we are always in flux; our ancestors endured two world wars in the 20th century where many came together to combat a foe. Indeed, we are now in the midst of a strange time, with many people displaced and dispossessed, a disturbing similarity emerges to what happened in those two great wars of the 20th century.
Refugees desperately search for new homes beyond bombing zones, while other countries ban the wearing of religious clothing. The UK government continues to participate in imperialistic action in Syria, Iraq and Afghanistan, and pushes its global agenda onto nations that are not interested or have very different values, which are as equal in their worth.
Both Sides Now 3: Final Frontiers endeavours to explore these divides, these boundaries and spaces between us, which exist as cultural legacies and hand-me-downs, like broken family heirlooms, with attached blame. Through this collection of films we aim to investigate personal experiences, global themes and fractures that need healing through cultural sharing and exchange. Both Sides Now is a tactical programme, which uses film and video to explore culture and society between different nations, the UK, China and Hong Kong, and beyond.
The UK programme contains work by artists who live in the UK, but who were not necessarily born there; artists who have experiences of the bordered UK, and have an understanding of its cultural frontiers. The artists in the programme who were born in the UK explore global cultures and are passionate about cultural communication. The Hong Kong programme includes work by diasporic Chinese and expatriates in Hong Kong and China, it aims to make visible fragments of experience and disrupt time, space and continuity. Final Frontiers attempts, through artists’ film and video, to redefine and close the spaces between us. 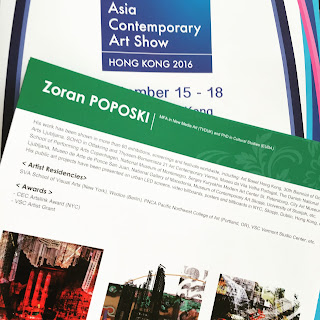 The 9th edition of the Asia Contemporary Art Show includes more than 3,000 artworks by 400 contemporary artists from around the world, including Andy Warhol, Robert Rauschenberg, Yayoi Kusama, Yue Minjun, Zeng Fanzhi, Yoshimoto Nara, Damien Hirst, Banksy, etc.: "including original paintings, limited editions, sculpture and photography from some of the world's most interesting and promising artists - from emerging and mid-career artists, to those who have already achieved recognition in private and public collections, and at auction."

The Art Stays Festival of Contemporary Art is returning for its fourteenth edition with a rich programme and many new features.

Art Stays is one of the most prominent presentations of contemporary art, especially of fine arts in Slovenia and Central Europe. Ever since 2003 it brings the latest in art, be it the well-know artists with their work hanging in museums, collections and guests at biennales, or those most promising talents - they all are invited to Ptuj. More then 600 artists have participated at the festival during the years.

Squares and buildings of the oldest city in Slovenia will offer exhibitions, performances, workshops, film screenings and other events from the most contemporary art production. More then 100 artists will be presented on the festival, as well as different types of contemporary art: photography, painting, sculpture, video, installations, performance and intermedia projects. The 14th edition of the festival has the title POLITIC(S), the focus for this year is „political art“.

The programme was prepared and curated by Jernej Forbici and Marika Vicari in collaboration with international galleries, museums, and a team of international curators with the special participation of the independent Chilean art curator Antonio Arevalo, Anna Balvanyos from the Ludwig Museum of Budapest, the Slovenian art curator Peter Tomaž Dobrila, and Manuel Frara from the Academy of Fine Arts of Venice.

Title POLITIC(S) was born from a reflection about the relations between politics, dialogue and language, especially in the field of arts that we discussed and observed in the last 13 years of ART STAYS. We as artists, curators, people that work with culture in general, have the responsability to represent and discuss about the POLITIC(S) in the form of choices, languages, wonderings, human rights, power, political and social system, war, terrorism, new identity, migracy, activism, propaganda, laboratories and communications.

A group show will be presented at Mihelič Gallery, dedicated to POLITICAL PRINT in collaboration with National Museum of Contemporary Ljubljana  and Stamperia d'Arte Busato. THE PACIFIST LIBRARY, a nomadic  project made by Curandi Katz, will also include a series of performances around the town of Ptuj. A retrospective exhibition, remembering the fourteen years of the Art Stays activity in the city of Ptuj, will be on display at Magistrat Gallery in the Town Hall. Site specific performances were created especially for 14th ART STAYS festival by Jiří Surůvka, The Area of Bustle, Costantino Ciervo and A4C (Rosa Jijon/Francesco Martone). ANYTHING TO SAY? a large size bronze sculpture made by Davide Dormino and Charles Glass presented in the heart of the city, at Mestni trg Square will demand and offer the possibility to act, to stand up and speak  or express a personal opinion.

Concert and multivision of Lado Jakša, a big concert of Women's Choir Kombinat, screenings of Antoni Muntadas and Nam June Paik, lectures and talks by Rosa Jijon, Bela Máriás, Zoran Poposki, artists of The Area of Bustle on the Slovenski trg Square, workshops for children curated by CID in collaboration with ART STAYS and for adults dedicated also to the engraving by Giancarlo Busato and photography by Davorin Ciglar Milosavljević.

The Festival will start on Friday, 8th July 2016 with the opening of the main exhibition entitled POLITIC(s) at the Dominican Monastery of Ptuj and a small performance by Jiří Surůvka. The concert of a famous Slovenian Women's Choir KOMBINAT will follow on a stage in Slovenski trg. The Festival will continue until 16th July on different venues of Ptuj with over 30 events. Exhibitions will be open until 5th September in different exhibition spaces. 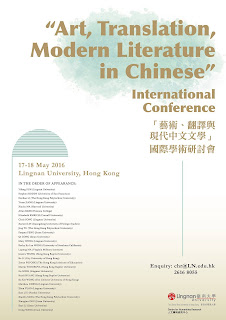 The conference will focus on the interaction between art, translation and modern Chinese literature, seeking to examine the nature of translational time and space where modern Chinese art and literature respond to the influence from foreign cultures. In this process, artists, translators and writers attempt to reflect upon the significance of the newly acquired practice across different cultural and political contexts. With an emphasis on interdisciplinary approaches, the conference hopes to explore a host of issues concerning translation in relation to modern Chinese art and literature, mediating complex influence from both inside and outside the Greater China region.

The Videotage booth at 2016 Art Basel Hong Kong  is a collaboration between the Art Basel Crowdfunding Initiative and Videotage.

Since 1986, Videotage has developed itself from an umbrella for media artists to a network of media art and culture for cross-disciplinary cultural productions, as well as a platform to facilitate international exchange. 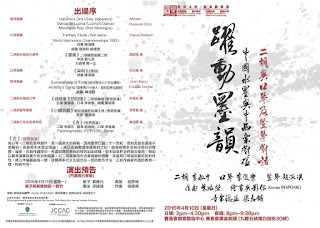 Landscape Beyond: A Journey through Chinese Music, Western Music and Chinese Calligraphy and Painting

With languages that range from photography and digital printing to painting, graphics and sculpture, the Macedonian artists not only give life to a powerful, creative and original vision, but also reflect on a land with deep cultural roots and a past to be protected. 140 works that are characterized both by their textures and choice of colours, and by their interpretation (at times ironic) of themes - the consumer society, memory, the subconscious, sexuality, the visual message, advertising – successfully recreating a psychological map of the human condition today.

Transfiguring is an Imago Mundi collection, a cultural, democratic, global, non-profit project, promoted by Luciano Benetton with the aim of creating the widest possible mapping of the different contemporary artistic experiences of our world. In Imago Mundi, each country is represented by the works of established artists and new talents, commissioned with the maximum freedom of expression.

Making art with the community

This gallery exhibition is designed as a showcase of community-based artworks created through a collaborative artistic process involving Hong Kong artists, representatives of civil society organizations, and students, facilitated by an international artist.

The exhibition aims to promote participatory community-based art by engaging visual arts students, visual artists and social services organizations in addressing community development issues through the artmaking. It furthermore aspires to raise awareness about the role of community-based art among the general public of Hong Kong. Through documentation of the art making process the participants bear witness to their personal experience, recognize their stories, and their contribution to public memory becomes a meaningful act of social agency.

Making Art with the Community is supported by The Hong Kong Institute of Education. 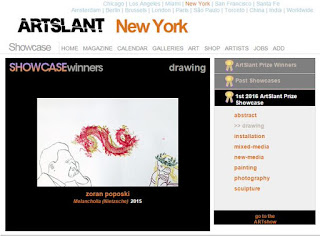 While occupying a single earth, many generations of people have amplified their differences from others and the similarities within their own defined groups.  Rather than coalescing around the idea that “we’re all in this collectively,” these extreme “US,” not “THEM” perspectives are expressed in both radical and in socially-accepted ways through racial and class prejudice, genocide, wars, political corruption, resource allocation, and fear messaging on social media.

This global, invitational exhibit involves more than 24 artists from the U.S. and around the world.

Artist Zoran Poposki's work is exhibited in the demilitarized zone on the border between South and North Korea. The exhibition is part of the DMZ Pilgrimage International Art Festival, which includes more than 60 artists from 11 countries, including Japan, China, India, Hong Kong, Korea, Germany, Canada, etc.

The theme of this year's festival is Facing Each Other. "The reality of national divisions forces us into a shared face-to-face position, whether the focus is physical or symbolic. In meeting, we are confronted with reality that is more than just a simple vestige relic of the South-North division left behind us: it is a wide open scar that persists until day. We practice facing each other for active healing. To face each other we must begin by recognizing the other," said the festival's Art Director, Cha Jooman, in the exhibition catalog. 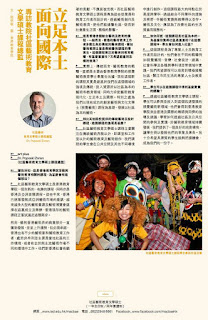